Be the first to review this product
CA$599.99
SKU
571101
A Fluidampr performance damper creates a foundation for improved
SPECIAL ORDER, USUALLY SHIPS WITHIN 10 TO 15 BUSINESS DAYS
Skip to the end of the images gallery 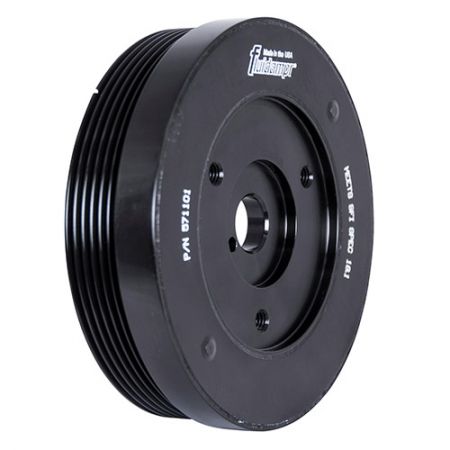 Skip to the beginning of the images gallery

Fluidampr has just released a performance crankshaft damper for the 2015 WRX and 2013+ FR-S/BRZ!

A Fluidampr performance damper creates a foundation for improved durability and performance by providing long lasting, broad range protection against destructive crankshaft torsional vibration commonly found with engine modifications. It is recommended to install a Fluidampr performance damper early in an engine build for optimum benefits. Ideal for street enthusiasts to professional race teams who desire a maintenance free crankshaft damper that will remain compatible as upgrades are made as well as last the life of the engine without costly and time consuming rebuilds or replacements.

Starting with engineering research data, a design was constructed with computer simulation software and put through a series of proprietary computer simulated tests, including Finite Element Analysis (FEA) to measure damper resonance frequency and structural limits. The diagram below shows the actual FEA analysis at 12,500rpm required by SFI 18.1 spec. It is nearly four times the safety requirement needed for professional racing. From computer modeling the damper is printed on a 3D additive printer and sent to select industry leading engine builders for fitment verification. Once design specifications and fitment were verified, functional prototypes were developed and product testing began.

The Fluidampr performance damper for the FR-S / BRZ / GT-86 and 2015 WRX applications was put to a difficult test using a common real-world setup. The car chosen was a 2013 Scion FR-S upgraded with only an exhaust, high flow air kit and basic tuner. Performed at a local tuning shop with Vibratech TVD torsional vibration experts, initial peak torque and horsepower measured 141lb-ft and 149rwhp respectively on a chassis dyno. Torsional vibration control, along with horsepower and torque gains were realized with the Fluidampr performance damper on the FR-S test vehicle. These performance benefits will also increase as future performance modifications are made.

To measure the effectiveness and impact of the heavier Fluidampr performance damper (5.8lbs, 3.8lbs rotating weight), a comparative test was developed against the stock tuned elastomer style harmonic balancer (4.87lbs) and a leading lightweight pulley (1.195lbs) that provided torque, horsepower and crankshaft torsional vibration comparisons. Two data set speed sweeps at a rate of 30 seconds each were conducted on each unit for consistency.

Further analysis shows that installing this lightweight pulley shifted the resonance frequency of the rotating assembly to a point directly within the rpm range. The result was higher magnitude 5th order and 6th order vibrations at a potentially destructive 600Hz from 4500rpm through redline. Higher frequency vibrations, because they happen more often per crank revolution can create hazardous stress, excessive wear and potential failure of bearings and oil pump gears. Under this test, the stress level felt by critical internal engine components increased three times with a leading lightweight pulley.

The Fluidampr performance damper for 2013-later FRS/BRZ/GT86 and 2015 Subaru WRX applications incorporates a six-rib drive pulley and is precision CNC machined from high grade steel. Both the outer housing and internal inertia ring is high-speed computer zero balanced from the factory. The pre-drilled 3 bolt hole pattern (1.810 center – 5/16-18 UNF 2.75) on the outer housing accepts an ARE dry sump drive or other accessories with the use of a custom mounting bracket. The damper is finished in a corrosion resistant black zinc chromate finish and includes an engraved timing mark. Made in the USA.

Write Your Own Review